“I'm screwed. I'm totally screwed.” Which pretty much sums up how my day was going.
Have you ever gotten that really bad feeling that your world is about to come to a screeching halt?
Can you imagine how a taxi driver would feel if he lost his car keys? How about a cop misplacing his sidearm? Ever lost something that was so important that words cannot describe the pit of despair that has formed in your stomach?
For a United States Merchant Mariner if you ever want to feel completely powerless and fear that you may lose your job in the blink of an eye, lose your TWIC card.
I know. I know. I can already hear people saying, “What is a TWIC card?” 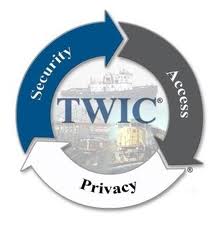 Briefly, a TWIC card is a Transportation Worker Identification Credential. A fancy way of saying “an expensive ID badge”. That's all it is. It is suppose to be an all-encompassing, biometric, totally fool proof, forgery proof, accepted everywhere ID card. Which sounds great on paper. Instead, no one knows what it is. It can't be used with a card scanner. Not everyone accepts it. And the agency that issues it has employees that even have no idea what it is. The bigger problem that I have with it is: I already had one. It was called a Z-Card. A Merchant Mariners Document, if you will. It had a magnetic strip (that was useless as well). A picture of my handsome mug. All the personal info that was fit to print. And, it too, was also unbeknownst to everyone else on the planet as to what it was.
Seems as though the TWIC card was a perfect solution to a problem that didn't exist.
However, as useless and as redundant as the TWIC card is, don't lose it. Even though you have a little orange passport looking book with all of your merchant mariner info in it that is a perfectly acceptable substitute, that makes no difference to the gate keeper at a terminal who is just barely able to keep the ketchup off their uniform during their midnight feeding. The TWIC card is the end all-be all of security. Useless, expensive, redundant, it may be, but you gotta have it or there is no going to work for you.

So started my Friday afternoon.
We had just returned from a “back-to-school” shopping trip, and I was emptying my pockets of the amassed collection of assorted receipts and random pocket lint. I took out my wallet to replace the previously used credit cards and noticed that my TWIC card was missing from its usually storage area. Not that odd considering I use it as my ID to get on the plane to go to and from work (I paid good money to get this stupid thing, I'm going to use it every opportunity I get. Even if no one knows what it is). Chances are I just left it in my other shorts or in my luggage.
Well, it wasn't. Not in the luggage, or in the laundry, nor by the computer desk, not by the bedside table, not in the kitchen. It was no where to be found. OK, this is starting to be bad. If it's not in the house it must have fallen out of my pocket in the car. A quick look around the inside of the car revealed no results. No problem. Sleep on it and we'll start anew in the morning on our quest to find that pesky piece of plastic.
My house has never been cleaner. I looked everywhere for that card. Not a stone, or book, or pair of kids pajamas, or piece of paper was left unturned. It wasn't in the house, that much I was sure of.
On to the car. Again. More thoroughly this time. It had to be there. It better be there. I only have so many options. Now my car is the cleanest it has ever been. So now I have a clean house and a clean car, but no TWIC card.
Plan B (or whatever letter we are up to at this point). If I can't find this card, what do I have to do to get a new one so I can go back to work? Quick hint: If you are near panic, don't try to look up information on a government website, it will just make the situation worse.
Turns out, that if you lose your TWIC card, the TSA will gladly issue you a new one. Great. This sounds simple enough. They already have your information, background checks, picture, etc. It should be easy just to make a new one and send you on your way.
Feel free to insert maniacal laughter at this point.
Not so much boys and girls.
First off, it's $60 to get issued a new card (after paying $150 to get the original). You can imagine my surprise when I found out the replacement card is NOT made out of platinum with gold leaf inlay. $60 for a replacement card?!
OK. Calm down. You need this card one way or the other. What else is involved?
The TSA will gladly take your money and your receipt is considered to be your temporary TWIC card until the new one is issued. The temporary one is good for one week and is accepted at terminals where you have been before and the security knows who you are. Well this isn't getting any better. A temporary card that is good for one week and is only accepted at terminals that I have been to before does me absolutely ZERO good. First off, a card good for 1 week only gets me half way through my work schedule. Secondly, we go to new terminals all the time. We hardly ever see the same people twice. Obviously, this is not a viable solution. So now I realize that I have to find this stupid card. But, as most things government related, it gets worse. Turns out, when you get issued a replacement card you have to go to the location where you got your original card issued from. For me, that would be in the port of NY/NJ. Trouble is, I live over 600 miles from there. So I pay $60, to get a receipt, that is good for a week, that is only accepted by people I know, so that in 2 weeks time I can travel 1200 miles to pick up a replacement for the same card that I just had? Did I mention that it takes 2 weeks for them to issue a new card? The receipt is good for a week, but it takes 2 weeks to get a replacement. Silly math. Fit to be tied, is the only description that I can come up with to describe my emotions at this point. Failure is not an option.
At this point, my wife had joined in the search for the elusive card. She was in the process of cleaning out her car in the hopes that it my have ended up there. I had completely given up. I had resigned myself to the fact that I was screwed. As I slumped into the driver's seat of her car, an exasperated look on my face, any hope of reuniting with my TWIC card long since gone, I related my situation to her. “I'm screwed. I'm totally screwed.”
“Buck up little camper!” (or something to that affect) she said, “Help me finish cleaning my car out. I still haven't looked everywhere yet.”
Sullenly, I agreed. If I have to drive 1200 miles to get my replacement card it might as well be in a clean car. I started with the center console. Nope, not there. Then I looked down between the console and the driver's seat. And there, snuggled in the upholstery, was a white plastic ID badge with a bar code on the back. The Almighty TWIC card has been found!!! It took all of 15 seconds. Heart attack avoided.
The next day, my wife went out and bought me one of those ID holders that you wear around your neck. I will never lose that stupid card again!
But, if I do, I'll be sure to check between the seats of her car first.

Posted by Chronicles of Crew Change at 3:50 AM