3 weeks on a tugboat is a long time. This last trip was an extended one so that we can switch around our work schedule with the opposite crew for the upcoming holidays. This way, one crew has the holidays off on one year and works the holidays the following year. Granted, it is only a week longer than our standard hitch. 50% longer for those of you who like math.  But, it seems to last MUCH longer than that. Of course, THIS didn't help either.
Apparently, we tend to get a little bit punchy at the end of three weeks. Not punchy in the way that you would like to hit someone repeatedly, although the Chief Engineer seems to take quite a beating on most days (I think he likes it). But punchy in the way that you just seem to find everything absolutely hilarious. No matter how small or trivial. Take this picture, for instance...

Mongo, our deckhand, and lasagna cook extraordinaire, for some reason, downloaded it onto his phone. He showed it to me in the galley just before we were suppose to be getting off of watch. I'm not really sure why.
Some say... it was because it was 0530 in the morning, or... that it was because we were 20 days into a 3 week hitch. All we know is... it was FRIGGIN' HILARIOUS!!!

If you don't get the previous reference, you MUST go watch some episodes of Top Gear.
Immediately.
It's okay. I'll wait.
And... You're Welcome!
Make sure it's the British version on BBC America. Not that crappy rip off on Discovery, or History channel, or whatever. That one stinks to high heaven. 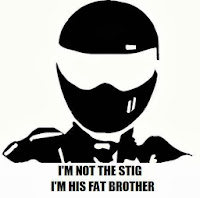 Anyways...
So Mongo, shows me the picture and we both immediately start laughing uncontrollably. Reverting back to our childhoods and the joy that was Saturday morning cartoons.
"What about the part where he flies over the paintbrush with glue?...Ahahaha"
"Ahahaha...and the glue is labelled 'GLUE' just so you know what it is!"
This went on for over an hour. Well over and hour.
To the point where when the Redneck was getting ready to go to bed, he poked his head in the galley and asked if we were going to be wrapping this up anytime soon.
We weren't.
In fact, it continued on into the next watch.
Going as far as to involve the pilot we had onboard that afternoon.
He too was sucked into the utter ridiculousness that was that Warner Brothers cartoon.
So without further adeiu...
I present to you...

Hilarious! Right?
It was released in 1953. A mere 60 years ago. I think it still stands the test of time.

At least it sure seemed to at the end of 3 weeks.

Nah. It stands the test of time. I still think it's funny.

Posted by Chronicles of Crew Change at 7:34 PM