Eight is Enough, Nine is..

It’s summertime here in the Gulf (and everywhere else in the Northern Hemisphere). So in addition to it being hot as Hades, it also means that school is out. And not just for the little youngsters in grade school. The Maritime Academies, the pipeline for fresh, young talent trying to muscle their way into the Maritime industry, are also out for the summer. That means that it’s “Cadet Season”. That time of year where the Academies send their best and brightest talent (and some real dipshits, too) out into the United States Merchant Marine fleet to get some real life maritime experience and rack up some of the required “Sea Days” that they need in order to test for their U.S. Coast Guard licenses.
Now normally our boat runs with a crew of 7. Proportionally, we have 7 staterooms. It’s a nice feature that everyone on the crew has their own room. Until the cadet shows up. Eight people in seven staterooms makes for at least one unhappy crew member.

My relief is currently out having surgery. That means unless someone new shows up to replace me, I’m stuck on the boat. Thankfully, someone new has shown up. However, in order to get familiarized with the inner workings of this fine vessel he has to show up a couple of days before we get off the boat so that we can show him all of the nuances of the boat before he gets turned loose all by himself. Our crew of eight, just grew to nine. We still only have seven rooms.

So now we have two unhappy crew members who were used to living in the lap of luxury in their private staterooms with roommates. It also adds two crew members to an already cramped boat. Mealtimes have to be done in shifts. Hallways are cramped. Somehow the grub manages to disappear at an exponential rate. Plus, having only two heads (bathrooms, for the non-nautical) makes for having to plan showers, shaves, and answering the call of nature into a well-timed experience. Especially when one head happens to be giving the Engineer fits and is not working properly.

Thankfully, “New Guy” (the cadet) and “New-New Guy” (my new relief) both seem to be stand up guys. It also means I get to go home with my regular crew at the regular time. So being a bit cramped isn’t really that bad. Plus, I’m one of the people that doesn’t have to share my room. Which is nice.

“New Guy” seems to be going for some sort of record on how long he can stay on the boat before he loses his mind. I fear he may be getting perilously close. The schools and the U.S. Coast Guard require 120 days of Sea Time in order to sit for your license. I’m not sure if he is trying to do it all at once or not. Truth be told, I’m ready to go home after a mere 14 days. 120 days on a tugboat is pure torture. He was going to break it up in 60 on/14 off/60 on. But we are well past the 60 days at this point. Good thing he is young. Us older guys would be sent to the funny farm weeks ago.

*Note to the schools- 60 days on a tug is a long time (On a ship it’s a piece of cake. Size matters. So I’ve heard). If you want to turn off young people from joining the Merchant Marine, this is definitely the way to do it. I guess being young and not knowing any better has its perks.

My relief, the spot being taken by “New-New Guy”, happens to be his first steering job. He has risen through the ranks and gotten cleared by numerous Captains in order to get where he is now. Based on what I saw during our brief time on the boat together, he should do just fine.

I wish him the best of luck. 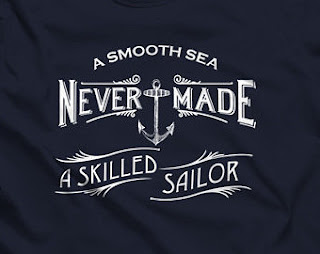 Posted by Chronicles of Crew Change at 7:28 PM