It took a while to write this post because I couldn’t move my hands.

It’s usually a cold day in hell when people declare, “I’m ready to go back to work.”
But that is exactly what I proclaimed the other day. (I would immediately regret that statement as soon as we crew changed in Corpus Christi. HUGELY regret it.)

My wife likes to do art and crafts type stuff. So much so that she likes to write blog posts about it. Who knew?

It’s also topical, because we refer to our mandatory weekly chart corrections on the boat as “arts and crafts”. The more you know…

Sometimes her arts and crafts projects get me involved. Which is just a really nice way of saying that she makes me do arts and crafts type stuff. Which usually involves me designing and printing a t-shirt for her and her friends. Usually at the absolute very last minute.

I would have gladly designed a t-shirt for her this time home had I know what kind of arts and crafts she had planned for me this time home.

In reality, it wasn’t artsy. Or crafty. It was a full on construction project.

It started with a picture on Pinterest.
Helpful tip: If your wives/girlfriends/significant others haven’t discovered  Pinterest yet, now would be a REALLY good time to block access to that particular website. It’s empowering. It’s dangerous. It will lead to people trying things that they have absolutely no business trying to do. It will drain your bank account. It will lead to frustration. And in my case, it will lead to wanting to invest in Advil (Again. Still).

There was a picture of a very simple pergola on a free standing deck.
Simple. Classy. Easy.
You may now insert maniacal laughter and calls of, “Don’t do it, stupid!”
Alas, you would be too late.

I don’t do simple.

Big. Better. Faster. Jeremy Clarkson screaming, “More power!” is my kind of project.
It’s also going to lead to my downfall. Or, at the very least, reliance on pain pills.

I was at work, so on my down time, I naturally took a simple design and made it all mine.
Sketches were sketched. Lists were compiled. Designs were laid out. Lumber and fasteners were priced out.  Locations and dimensions were all planned out. It was all very OCD. It was my kind of plan. I preplanned everything so that when I got home I would be ready to rock and roll with my arts and crafts.

And then my plan fell apart.

Somewhere along the line(and I’m not sure where this happened) my plan for doing a very nice free standing pergola in the backyard turned into doing TWO pergola’s in the backyard.

But that’s not the pergola I had preplanned. It wasn’t the one I had drawn up plans for. Or the one I had cleared the woods in the backyard weeks before. That pergola happened to be a completely separate and completely different one.

Obviously, more preplanning was going to be needed. So back to the drawing board I went.

I now had plans for two pergolas. I had twice as much wood. Twice as many nails, screws, lag bolts, washers, and assorted fasteners. Twice as many posts, stringers, headers, footers, and other construction type names for all my assorted wood products.  I also had 1200 pounds of concrete. The problem was (one of many), I had no way to get it to my house without 3,682 trips to the store.

Enter the nice people at the Lowe's Corporation.
For a mere $59 they would deliver everything that I needed to complete my pergola (now pergolas) project right to my front door. SEND IT! And when I happened to forget a few things (82 pieces of decking, actually)and called back very early the next morning to try to add it to my order, they had no problem helping me out. In less than 2 days, Lowe's took my order, fixed my order, gave me a discount, and delivered all of my arts and crafts supplies straight to my driveway. On a Sunday, no less. And earlier than they had expected. All in all, a well spent $59. Well done, Lowe's. Well done.

Sidebar: Lowe's Home Improvement World Headquarters is located in my town. Just a hop skip and a jump down the road. I think they were just nice to me just knowing that a 5 minute car ride would put me right on their front door. Instead, I may just visit them and tell them what an outstanding job they had done.

So I had wood. Lots of wood. And a plan. Two plans, actually.

The only thing I needed now to make this project even better was unseasonably hot temperatures to work in. Which I got. All week. I didn’t even have to pay extra for that.
Another helpful tip: Buy sunblock. A lot of it. And actually use it.

It took me 3 days to build the first pergola on the concrete patio. It took another 2 days just to paint the thing. 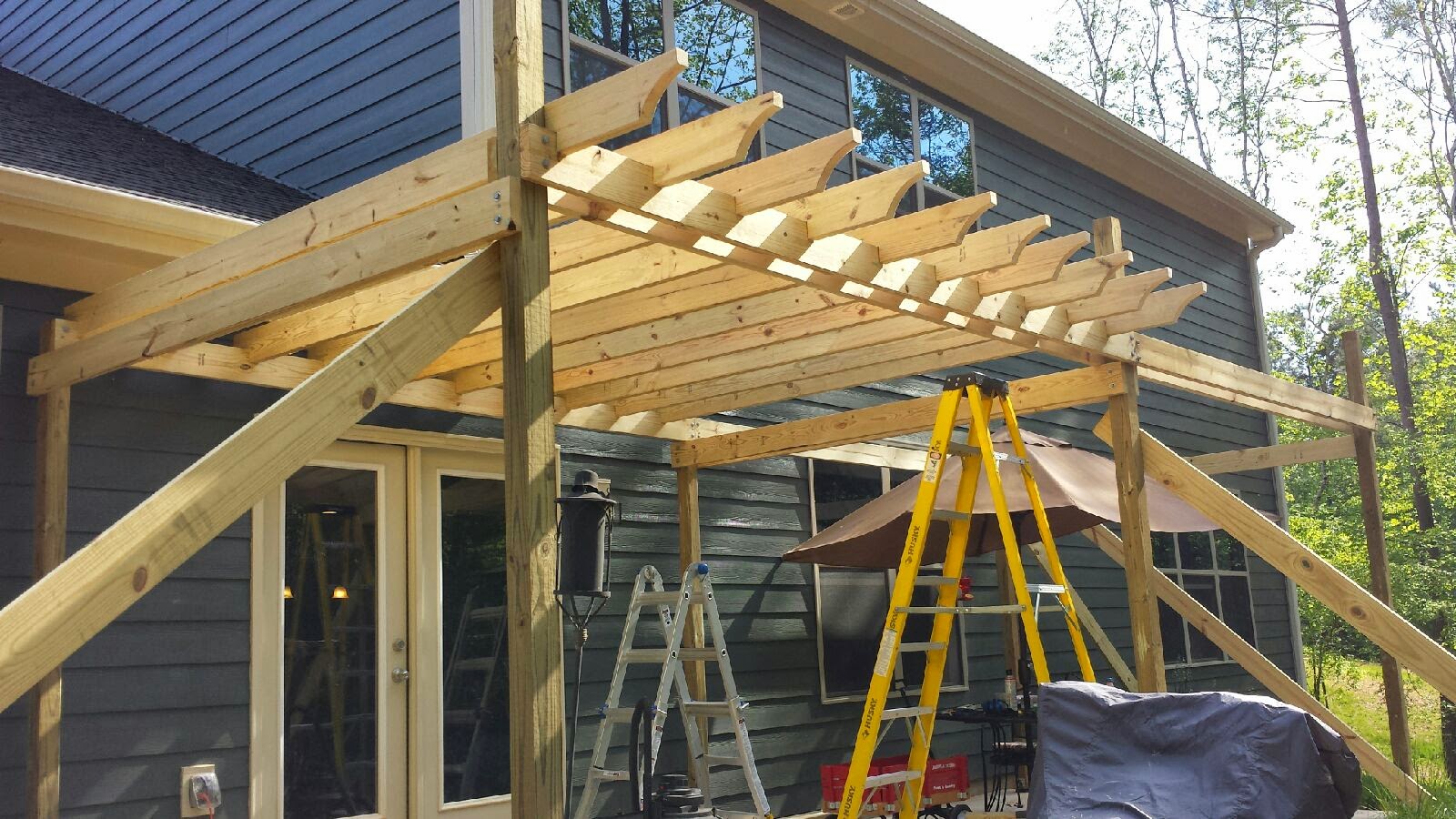 Then I started on pergola #2. It took a while to get the posts set in concrete just the way I wanted them. Then more time to get everything level and just right. I was shooting to have pergola #2 be 24 feet long from end post to end post. It was 24 feet and 1/8 of an inch. Good enough for Government work!
I wasn’t able to complete pergola #2. I still have to pour some more concrete and construct the built-in fire pit. But I made pretty good progress. Especially considering how difficult digging the post holes in stubbornly hard Carolina red clay is. And how bruised my shoulders are. And how scratched up my arms and legs are. And the fact that I couldn’t fully close my hands for 3 days. And the toll that working in 90 degree temperatures all week took.
Advil and ice water were my best friends.

And then I did something incredibly stupid. Even stupider than trying to build two pergolas on my time off.
I said that I was ready to go back to work.

Now that I'm at work, I want to go back home again. And build a pergola. I'll even do it in 100 degree temperatures. I'll even build one for my wife's friends.

Or did I just say something really stupid again?

I think I'm detecting a pattern.

Posted by Chronicles of Crew Change at 2:28 PM