You know the old saying, “Be careful what you wish for, you might just get it”? It would seem as though my current wish will go against everything that a mariner would ever ask for.


“I wish for high winds and rough seas.” Briefly.


Turns out that our crew change will not go as planned due to the efforts of a single person. Again. For the umpteenth time.


Instead of a crew change in the civilized port of New Orleans (at least as far as crew changes go) one person has decided that coming back to work a day early is a no-go. Instead, we get to proceed to Corpus Christi, Texas and crew change, at a minimum of a day late, over there. Now most people would be under the impression that Corpus Christi is a nice place to go and visit, spend the day, see the sights. And they would be correct. But not when your only goal in life is to get out of town and head home with extreme prejudice. Perhaps an explanation concerning my wish will help to clarify things some.


In October of last year we got to experience the joy that is crew change in Corpus Christi, TX. The boat was anchored approximately 5 miles offshore. Seas were running about 6-8 feet with a wind out of the southeast at 20 knots. Our mighty steed for these marginal weather conditions was a 22-foot open cockpit center console SeaTow boat. Our transportation to-be was not at the marina, but instead arrived at the dock on a trailer. A trailer with only three wheels. One had disintegrated at some point enroute to its destination. Not a good sign. But appropriate considering the following tale. We were then informed that the crew would be split up into two separate groups, as the vessel was not rated to carry more than 6 passengers for hire at any one time. We loaded up our grub, and half of the crew, including the “person who shall not be named”, into all of the available deck space for the voyage into the unknown. The rest of the crew, myself included, was left behind on the dock to ponder life in general and to kick the cockroaches into the water as they scurried by. It passed the time.


An hour and a half later the dinghy, and half of the off coming crew, was sighted rounding the bend as they approached the marina. I believe we spied the whites of their teeth before we spotted the boat. As they pulled into the slip we could see a jovial group, not just happy to be off the boat to be going home, but one filled with the knowledge that “the person who shall not be named” had one of the most terrifying experiences of his life. It was related to us that by the time the SeaTow vessel had reached the boat, the crew was soaked to the bone, the food was thoroughly drenched in a bath of salt water, the eggs and other perishables were smashed to pieces, and “the person not to be named” was white as a ghost and had the look of death upon his face.


If I have but one regret in life up until this point, it is that I wasn't there to see his face.


Apparently, it wasn't a smooth ride. 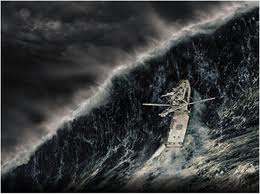 As my relief relayed the tale of hilarity, he passed to me a multitude of 55 gallon trash bags.
“Here, wear this”, he told me, “you'll thank me later.”
If there was ever a sign of impending doom, this was it. So we wrapped ourselves and our luggage into the giant Hefty bags and set out on the mariner equivalent of "Mr. Toad's Wild Ride". You could see the crew that was going home on the dock, waving, and cat-calling, with the biggest shit-eating grins you have ever seen in your life on their faces as we exited the marina.
I believe I relayed to them (edited for content), “Smile all you want. You won't have a relief anymore if we all die!”
I don't think it helped. I'm pretty sure their comments got more crass and crude.


As we rounded the jetties we got our first taste of what the other crew was so giddy about. The eggs didn't have a chance. 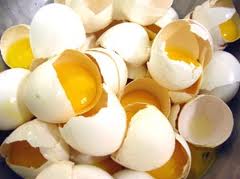 Right in our face was the wind and seas. It was rough. It was wet. It was making me smile thinking about how miserable “the person who shall not be named” had been. It took a good 45 minutes to travel the 5 miles to the boat.


I would like to take this opportunity to officially thank my relief for his gift of trash bags. Sure, I looked like a gigantic condom, but I was dry. Sort of.


Amazingly, we all survived.


The first thing that was said by “the person who shall not be named” after we had gotten all dried off and settled in was, “That was bullshit! That will never happen again!”

“I wish for high winds and rough seas.”


As it turns out, the other crew, with those shit-eating grins on their faces, got theirs in the end. The Corpus Christi airport closes completely at night. “Lock the doors and roll up the carpet” kind of closed. So they were forced to sit outside the airport all night until it opened in the AM. More than one security guard got the, “No shit!” look flashed their way when they remarked, “Airport is closed.”


So in addition to getting off the boat late, we also get to sit outside the airport all night as well. Sure is going to beat crew changing in New Orleans.

“I wish for high winds and rough seas.”
I don't ask for much.

Posted by Chronicles of Crew Change at 11:47 AM