What Did We Learn?


It was a rough hitch. So we’re going to play a little game called…”What Did We Learn?”
We learned…

You learn something new every day. Sometimes, more than one thing. 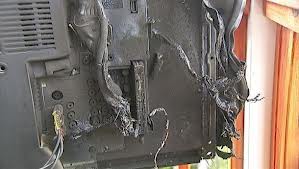 "Are you SURE it's broken"
or
"That will buff out"

Note: This is NOT the TV we burned up.
We took the plastic off before we caught it on fire.
We're not stupid.
Which is also up for debate.
Posted by Chronicles of Crew Change at 1:40 PM