Heck, even the Origami stuff looks relatively easy. But we aren't talking about Origami or making paper airplanes.
We are talking about trying to fold brand spankin’ new nautical charts. Which sucks. And isn't easy. And isn't simple. Did I mention it sucks?
For the less than nautically inclined, nautical charts are maps of the ocean. But they aren't maps. They are charts. They are the same thing. Except that they aren't. Maps are for roads, charts are for the water. See, in the maritime world we have a lot of different names for things that already have names. Keeps the non mariners from really understanding what is really going on. Walls are bulkheads, floors are decks, ceiling are overheads, port is left, and starboard is right. The list goes on and on. So, maps are charts and new ones suck.

As a general rule, I have no issue with charts. It's just the new ones that are the subject of my ire. Every week the Feds come out with a list of corrections we have to do our to our chart portfolio. Buoys get moved. New navigation lights get put up or taken down. Changes in the hydrography. And of course, wrecks happen. And all the changes have to get put down on the chart in order to make sure the information is as current and as accurate as possible. So every week we get to do "Arts and Crafts" on the boat. We get to use markers, colored pencils, tape, scissors, rub on transfer sheets, and stickers. It's all very preschool. But every now and then there are enough changes over the years to a particular area that a new chart is issued. Now you would think that a brand new chart would be nice. You would be wrong.
I hate new charts. Hate them. Not as much as I hate Corpus Christi, TX. But it’s definitely right up there.
To begin with, your old tired beat up chart had all of your courses laid out. It had all of your distances and average speeds put down. You had all kinds of notes and hints and local knowledge of the area written in the margins. Areas to avoid and good holding anchorage spots were meticulously maintained on that old chart. A new chart has none of that. And the only way to keep that information updated is to break out the pens, colored pencils, and highlighters and transfer it all onto the new chart. But that isn't really my biggest gripe. The thing that irks me the most about brand new nautical charts is folding them. How could folding a piece of paper into a couple of squares be so difficult? First of all, have you ever tried folding a circle into a square? Yeah, not so easy.

Our new charts come to the boat all rolled up in the tightest cylinder ever made possible by machines.
Then the charts sit in this nice tight cylindrical form for about 2 months so the paper builds up a very nice memory of its current shape. The mere act of trying to get this paper from a circle to a square is where the paper and I no longer are friends.
The more I try to unroll the chart and make it lay flat, the more it rolls itself back up and mocks me. I've tried rolling it up the opposite direction. I've tried leaving it alone unrolled for a week in high humidity. I've let them hang over the wheelhouse railings to let gravity do some of the work. I've tried leaning both of my arms on it, putting books at the corners, using a ruler to straighten out the edges. I think I've tried just about every method ever known to mariners. I even contemplated just leaving them for the other crew. And since they are paper, where would you be without the mandatory paper cut somewhere along the way. Needless to say, new charts and I just don't get along.
After a tirade infused 15 minutes of fighting with a piece of paper, it’s one chart down, 12 more to go. It’s going to be a long afternoon. 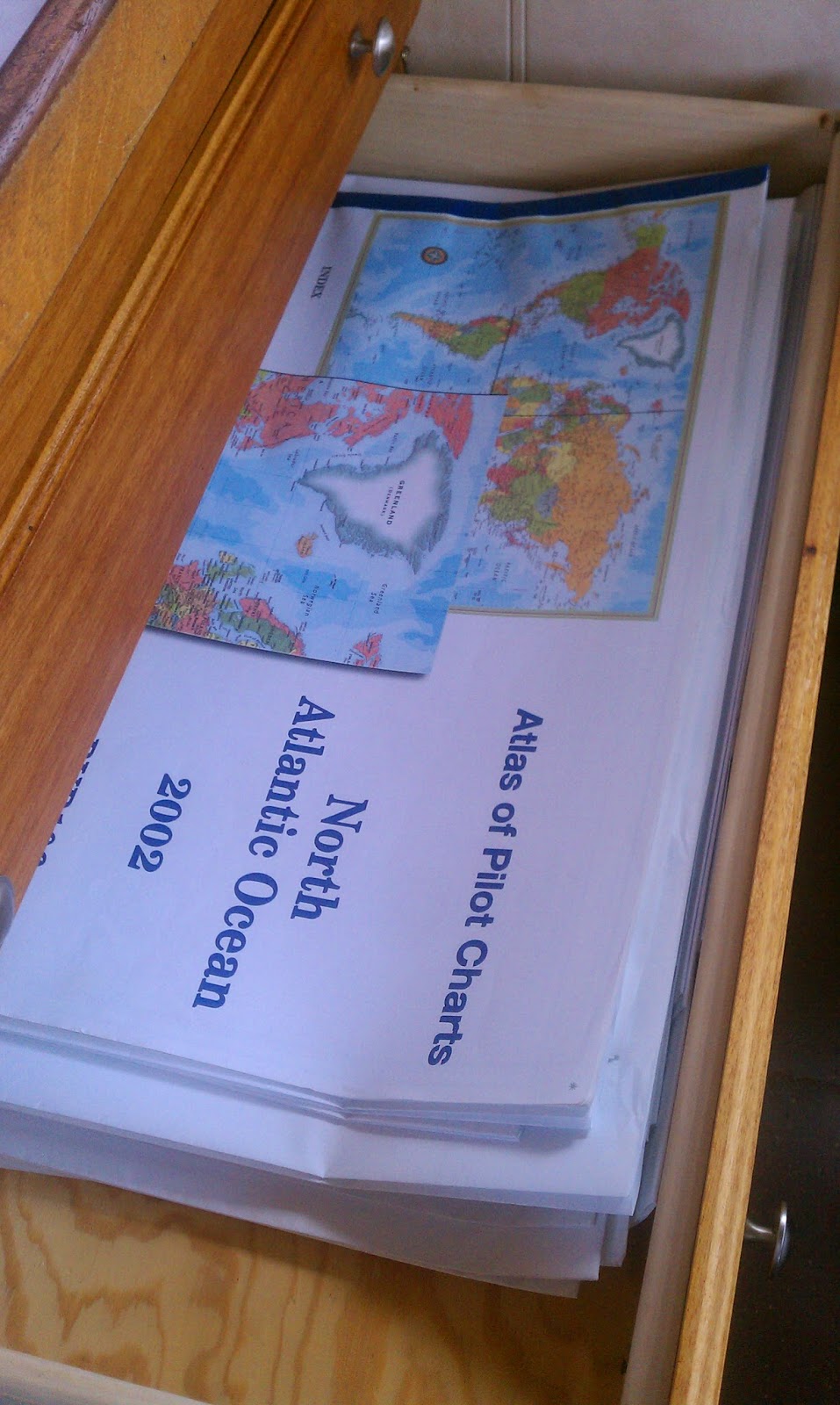 Posted by Chronicles of Crew Change at 3:23 PM