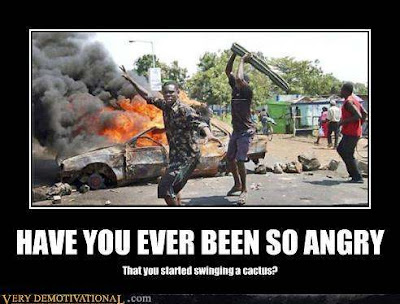 Yup. That pretty much sums up how I have been feeling lately.
Good thing there are no cacti on tugboats.

A hitch ago I was making fun of two of my shipmates who were left behind on crew change. For once, I wasn't the one left behind watching as the rest of my crew departed for home.
But, karma is a bitch.
The very next hitch, once again, I was the one stuck aboard on crew change day.

I knew it was coming.

Mere moments after my new relief was informed he was going to be assigned to the boat, we had this conversation.
"So I guess I'm going to be your relief. Hey, can you work over for me? My friend is getting married and I want to go to it."
"No. I'm suppose to be closing on my new house and I have to move that week because the lease on my current house expires the day we get off."

So there it is. Not even one hitch on the boat and he wants time off. For a wedding. On a THURSDAY? Who gets married on a Thursday?
But I ALSO had plans.
I had things I needed to get done.
The difference being, my plans were for my TIME OFF.
We all have things that we want to go to. It's the nature of the beast when you work for 6 months out of the year. We have covered this before. You're going to miss things.

I missed the birth of my son for FUCKS SAKE!

It sucks that your buddy planned his wedding for the time you are suppose to be at work. It sucks that I just happen to be scheduled to move that week and I can't cover for you. But sometimes life isn't all rainbows and unicorns.

I still knew it was coming.

I knew no one was going to be able to cover for him. I knew there wasn't anyone in the company willing or able to cover for him. I knew that the were two possibilities.
1. He sucked it up and told his friend, "Sorry. I wish I could attend your wedding. But I have to work."
2. He went to the wedding anyways and I get screwed. Because if no one shows up to be your relief you don't go home.

I wish I had a cactus.

So my relief is going to a Thursday wedding. I'm staying behind. My wife is pissed. And so am I.

Posted by Chronicles of Crew Change at 12:04 AM