As a General Rule, I like to try and keep this blog relatively upbeat and light hearted. Funny little stories intertwined with doses of moments of sheer terror. Essentially, a carbon copy of life aboard a tugboat.

Alas, on occasion over the last few years I have had to pen my thoughts regarding the loss of friends, mentors, and coworkers. An unfortunate reality of life.

Featured in some of those "funny little stories" was my deckhand, who the crew had nicknamed "Mongo".
Mongo came over to my company a few years ago from another tugboat company. He had just gone through a condensed, accelerated school to get his steering license and was striving to get a Mate's position. While he was training to fine tune his boat handling skills, he was also my deckhand.

During the time we worked together, Mongo was always the center of attention. If he wasn't, he was trying to be. Mongo was a big dude. But it wasn't always his physical stature that was the focal point. Case in point, at some time during his wheelhouse training with us, a stuffed, fluffy unicorn that lit up and played music appeared in the wheelhouse. Mongo was definitely a little kid, trapped in a big body.

His personality is of course highlighted by this story from around Christmas time a few years ago. If you haven't read it, please take the time in order to get just a little bit of insight into who Mongo was.

Mongo was also a motorcyclist through and through. Crew changes were always an interesting sight. Whenever he wasn't dressed like this... 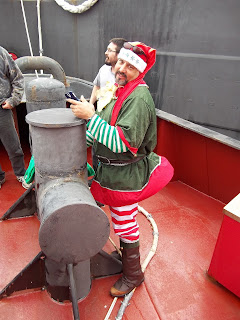 You could definitely find him dressed in a leather motorcycle jacket, his wallet on a chain, and more skull rings and jewelry than any one person should be allowed to wear at any one time.

He was a perfectionist. A hard worker. He was a bit quirky at times. But also one to lend a hand and try something that he had never attempted before. As was the case when we rebuilt the galley on the boat with some rudimentary tools and a lot of cursing. So became the beginnings of...

Recently, I was in the office doing office type things, when Mongo's name came into the conversation. He had just been signed off as a Training Mate on the boat we had worked together on. It was the first crucial step in getting that coveted job as a Mate he had been striving for. Mongo and his unicorn were going places. A mere month later from that innocent conversation in the office, we received another message from the office regarding Mongo.

Mongo was on his time off. Undoubtedly enjoying a must needed break from moving to a new boat and starting his training with a new Captain and crew. Mongo was at home in Florida riding his motorcycle, something which he absolutely loved to do. He had an accident and was killed.

Another friend gone too soon. Another Brother mariner taken from the maritime family way too early. Working on tugs is a dangerous business, but one doesn't have to be on the boat to be taken from us.

I'm not the best when it comes to saying goodbye to friends I've lost. This one is no different. We always just assume people will be there and not taken from us. I looked forward to seeing Mongo around the harbor. I wanted him to give us an assist into the dock on his new boat. I wanted to see how he had progressed as a boatman from the last time I had worked with him. I wanted him to keep working hard and get that Mate's spot. Instead, I get to pen another blog post lamenting the loss of a friend. Struggling with how to end a heartfelt miss-mash of words trying to describe a man who cannot be described with words alone.

That is about the best I can do. 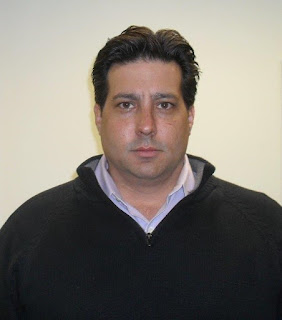 Posted by Chronicles of Crew Change at 4:19 AM